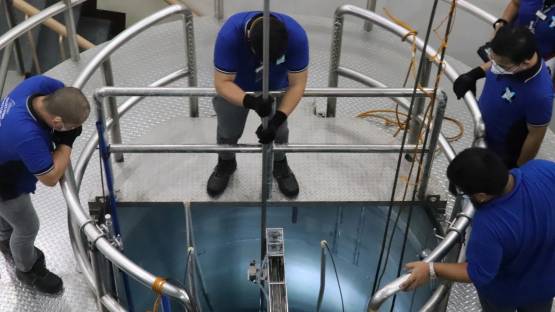 Subcritical assembly for training, education and research begins operations in the Philippines

After more than three decades, the Philippines is once again operating a nuclear facility, the Subcritical Assembly for Training, Education and Research (SATER), according to the International Atomic Energy Agency (IAEA). In 2014, a proposal was accepted to use fuel elements from a shut down research reactor for training and education purposes, which the IAEA is supporting through a series of technical cooperation projects . In the first project, launched in 2016, the IAEA helped the Philippine Nuclear Research Institute (PNRI) build its capacity in reactor design, neutron dosimetry and regulatory issues related to research reactors.

A second cooperation project followed in 2020 and is underway to further build capacity, particularly in reactor engineering and operation, reactor utilization and the development of a reactor training program for support local capacity building activities. “With nuclear energy in consideration for the country’s future energy mix and a demand for nuclear technology in different sectors, it is essential to build capacity and develop a new generation of scientists and manpower in this field. “, said Syahril Syahril, head of program management at the IAEA. for the Philippines.

In June, PNRI loaded 44 nuclear fuel rods into the core of SATER’s newly constructed tank. The fuel rods had previously been stored unused for over 30 years. The new SATER facility is housed in the Philippine Research Reactor 1 (PRR-1) building and will remain in a subcritical state, meaning that the nuclear fission chain reaction depends on neutrons from an external source.

The 1 MWt PRR-1 research reactor reached criticality in 1963, but has been in extended shutdown since 1988. “The activation of the PRR-1 SATER is an important milestone for the Philippines, as the facility will provide significant to restoring the country’s capabilities,” said Alvie Asuncion-Astronomo, research associate and former head of the PNRI’s nuclear reactor operations section. For the past two years, the IAEA has assisted local regulatory and operational personnel by providing recommendations on the licensing and commissioning of the PRR-1 SATER. The IAEA and international experts participated in various on-site missions.

PRR-1 SATER will support the recently launched nuclear education programs at the University of the Philippines Diliman and the University of Mapua. In the research field, it will be used for reactor physics experiments, as well as a demonstration facility for neutron irradiation and neutron activation analysis.

“The PRR-1 SATER should be a training reactor for operators, regulators and users of research reactors. It also aims to increase the stakeholder base of research reactors in the country,” Asuncion-Astronomo said. “The facility is expected to open up the entire scientific field of reactor physics and engineering to the Filipinos and pave the way for the Philippines to strengthen their niche in the nuclear field.”

The facility is expected to complete commissioning tests and become fully operational by 2023.

Image: Fuel descended into the heart of the PRR-1 SATER (Image: PNRI)