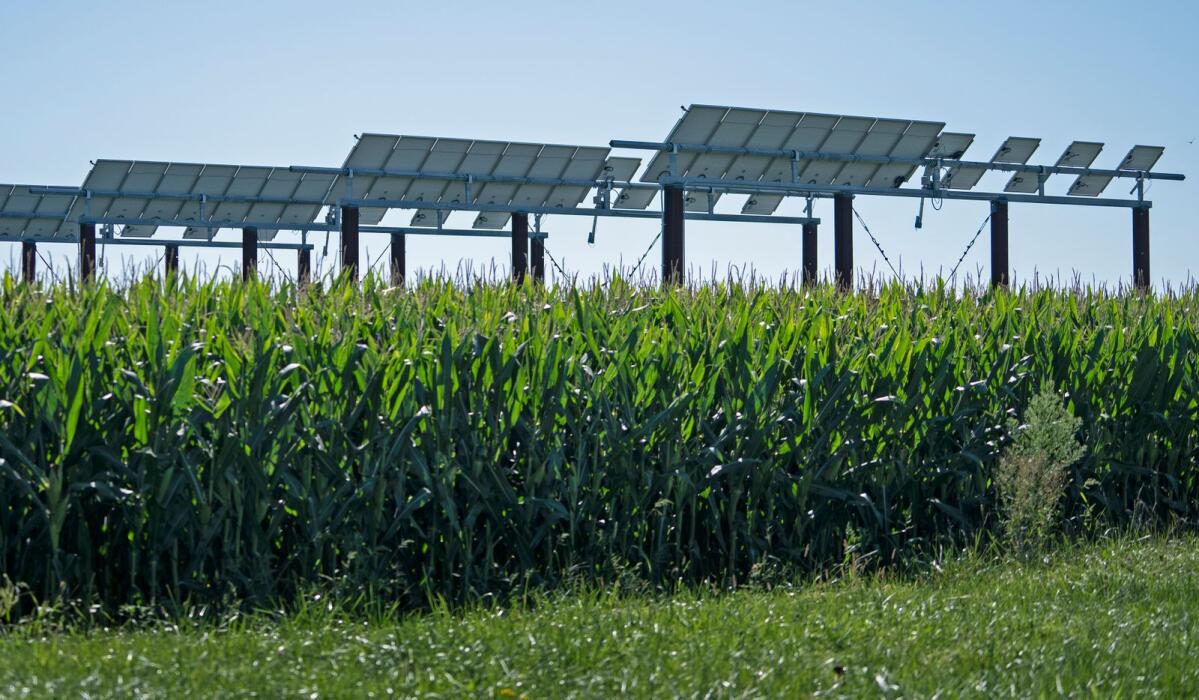 Solar panels, a full, checkerboard design, stand above soybean and corn crops Aug. 31 in West Lafayette, Ind. Purdue University is researching agrivoltaics, the co-location of agriculture and solar power, with some experimental plots being used to see how corn and soybeans grow under solar panels. They learn to co-produce electricity and food on the same fields at the same time. (Kelly Wilkinson/Indy Star)

A sign opposing industrial solar power is seen at the edge of a cornfield at the intersection of Shellsburg Road and Blairs Ferry Road in Palo September 8, 2022. The proposed Duane Arnold Solar projects that would be developed and built by NextEra Energy Resources, LLC, would generate 200 megawatts of power from solar panels over the two phases of the project. (Jim Slosiarek/The Gazette)

Purdue doctoral students Geoffrey MacRae Sanchez, left, and Varsha Gupta, and Mitchell Tuinstra, professor of plant breeding and scientific director of the Purdue Institute of Plant Sciences, tour their research plots with solar panels on soybeans and corn on September 1 in West Lafayette, Ind. Purdue University is researching agrivoltaics, the co-location of agriculture and solar power, with experimental field plots used to see how corn and soybeans grow under solar panels. They learn to co-produce electricity and food on the same fields at the same time. (Kelly Wilkinson/Indy Star)

Solar panels tower above soybean and corn crops on August 31 in West Lafayette, Ind. Wind turbines for power generation are seen in the distance. Purdue University is researching agrivoltaics, the co-location of agriculture and solar power, with experimental field plots used to see how corn and soybeans grow under solar panels. They learn to co-produce electricity and food on the same fields at the same time. (Kelly Wilkinson/Indy Star)

Acres of corn stand on both sides of a narrow country road in northwest Indiana. It’s late August and the corn is growing, its golden crown covered in dew droplets glistening in the morning summer sun. Then there is a different glow on the horizon, one that is brighter.

Four rows of 20-foot-tall solar panels towering above the stalks growing below sprout corn like a super crop. Corn and panels harvest the sun.

“They’re storing solar energy anyway,” said Mitch Tuinstra, professor of plant breeding and genetics at Purdue University. “One stores them as electrons and the other in plants.”

Tuinstra is one of several Purdue professors and graduate students studying these solar panels in the university’s research area, a few miles from the campus in West Lafayette, Ind.

Farmland is well suited to solar development of all kinds, for the same reasons it is good for growing crops – it is largely flat, drains well, and receives plenty of sunlight. What makes these Purdue research panels different is that they haven’t taken farmland out of production — they’re built on the corn itself.

It’s a practice known as ‘agrivoltaic’ or ‘agrisolar’, where active farming and solar energy occur in the same place rather than separately. This approach has many complications that researchers are still trying to resolve, but they see great benefits in trying to focus on best practices.

Farmers who wish to lease their land for solar power as an additional source of income will reap even greater economic benefits if that land remains in production – and some agrivoltaic approaches may even help the crops themselves, researchers say. .

“We want to see if we can design systems that have minimal losses in crop productivity, while maximizing their power output,” Tuinstra said.

Additionally, he said, researchers want to see how the co-location strategy could be a remedy for a growing tension between solar power and agriculture in the Corn Belt — where residents and cities are pushing back against this. which they see as industrialization in rural communities.

The stakes behind this effort are high: solar power has a key role to play in reducing greenhouse gas emissions, primarily from fossil-fuelled power plants, which are causing the growing effects killers of climate change.

The U.S. Energy Information Administration estimates that by 2050 — when the Paris climate accords state that the world must reach net zero carbon emissions to avoid another climate catastrophe — solar generation will account for 20% of the net electricity production in the United States, compared to just 3% in 2020. The Biden administration is investing to achieve this, including billions under the Inflation Reduction Act for solar production and credits investment tax.

But the panels cannot be concentrated in one region – such as the deserts of the Southwest – due to the high cost of transmitting power to other locations. Instead, Tuinstra said, localized renewable energy construction will help utilities and consumers reap the benefits closer to home.

A 2021 Department of Energy report concluded that by 2050, land equal to a maximum of 0.5% of the area of ​​the contiguous United States would be needed for solar projects to help achieve the climate change goals. By comparison, farms make up about 40% of all land in the United States. Yet that 0.5% of US land would represent nearly 9.5 million actual acres, or nearly all the corn and soybeans planted in Indiana alone.

In the corn belt, the majority of the land that could be used for solar power is occupied by row crops. For some inhabitants of these areas, solar represents a horror and a threat to crops and culture.

In late August, the corn surrounding the Palo Community Center in Palo, Iowa was over six feet tall, heading into harvest season. But this year, something else was growing nearby: signs with a red X running through the words “industrial solar.”

In the community center, residents waited to hear the fate of a proposed 200-megawatt solar installation — a traditional design, not agrovoltaics — that would be located on farmland near the town. Some participants supported the project; many condemned it, most citing objections to the setting aside of cultivated land. The projects were approved the following week.

When several meeting attendees were asked if piling solar panels on active farmland might be a viable compromise, many were skeptical.

Robert Little, a 74-year-old electrician who said he has worked on farms all his life, said agrivoltaics could jeopardize generational practices.

“The biggest concern would be old family traditions,” Little said. “And the other conflict is that I don’t think it can ever work.”

Communities and counties across the Midwest are saying no to solar — like in Indiana, where nearly a third of counties have ordinances restricting or even banning renewable energy projects. This skepticism is a great source of motivation for researchers who see agrivoltaic as a win-win approach.

But there are unresolved challenges, like the shadows produced by solar panels. Tuinstra and his team at Purdue are studying this, hoping to model the optimal spacing between arrays and develop technology to prevent excessive shadows from interfering with crop production.

Building agrivoltaics in cooler environments might even be good for the panels and the plants below, according to Bowman.

In the southwest and northeast, a federal program plans to co-locate solar power with specialty crops such as lettuces, tomatoes and berries. These small plants are better suited to an agrivoltaic environment because they benefit from shade and require smaller equipment.

But in the Midwest, the acreage of corn and soybeans far exceeds that of specialty crops — and that requires more sun and bigger equipment for planting and harvesting. Thus, some studies are also looking at how to design different types of seeds and crops that are better suited to growing with solar energy.

Social scientists on the Purdue team are also studying public concerns about agrivoltaics and how to communicate about them to farmers using facts, Tuinstra said. And solar companies are getting involved, seeking advice on designing a system that can accommodate planting and harvesting.

But trying to optimize both crops and technology puts researchers and developers in a chicken-and-egg loop: to get funding for projects and reduce development costs, you need years of proof that they work. But to build these proofs of concept, you need money and affordability.

Poor’s is conducting its own research into cost-effective ways to build taller, more widely spaced solar panel mounts that can accommodate taller crops and larger equipment. It is pursuing smaller agrivoltaic projects with partners willing to pay the cost of materials, hoping to eventually scale up production as data comes in.

But it is difficult to attract development partners in an area that remains relatively untested.

“They seem just as wary as farmers when it comes to signing up for a project,” said Tyler Lloyd, director of solar operations for Midwest Agrivoltaic Systems.

However, not all farmers are against it. Those with combinations of row crops and livestock have proven more receptive to the idea of ​​agrivoltaics, Bowman said. New farmers less tied to traditional growing and harvesting tactics may also be interested in the technology.

“The trend has been to get this big equipment, farm a lot of acres, and grow it quickly in a timely manner to get the maximum yields,” he said – so to see solar proliferate on farmland conventional, “it may take a different mindset.

This story is a product of the Mississippi River Basin Ag & Water Desk, an independent editorial network based at the University of Missouri School of Journalism in partnership with Report For America and funded by the Walton Family Foundation.