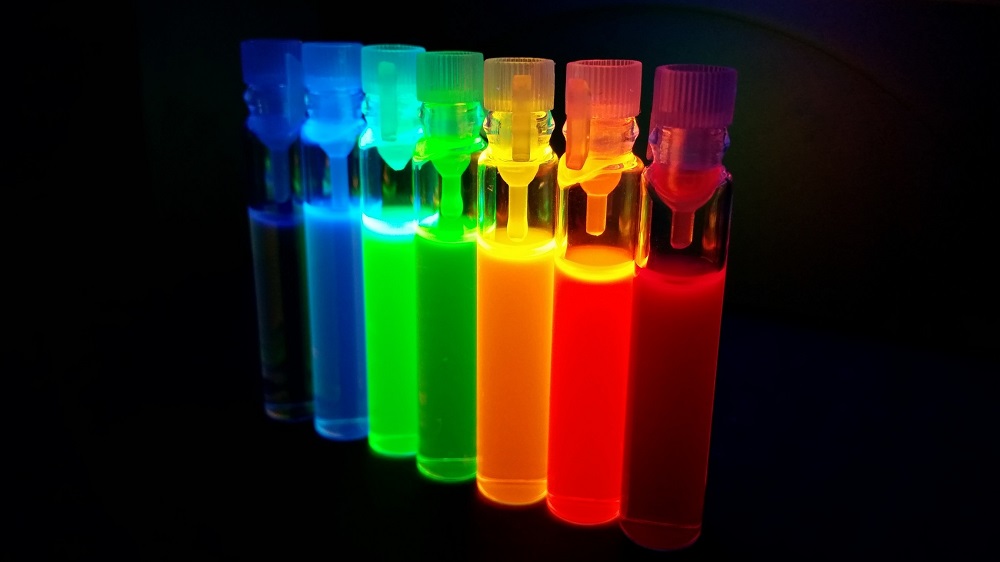 In most image sensors, the red, green, and blue components of a given pixel are captured independently using a dedicated photodetector cell for each color. Although the three cells of each pixel are arranged laterally and as close to each other as possible, the design takes up at least three times the space of each individual cell. In addition, the manufacturing and processing costs of these photodetectors can be high due to their complexity.

Quantum dots, nanoparticles designed to be sensitive to specific frequencies, owe their quantum effects primarily to their small size. Their durability, sensitivity and ease of use in manufacturing processes make them particularly attractive for the development of breakthrough color image sensors. Courtesy of Chung-Ang University.

Quantum dots have an advantage over the traditional side pixel layout because they can be stacked vertically within each pixel, reducing the area needed to create a sensor. The quantum dots in the lower positions are still able to receive photons that are not absorbed by the higher levels of quantum dots, allowing the photodetectors for each color of each pixel to be accommodated in a much narrower area.

Using a low-temperature manufacturing procedure, scientists were able to squeeze a surprisingly large number of pixels into a small area. “The device density of our photodetector array is 5500 devices per square centimeter, which is remarkably larger than that reported for previous solution-processed flexible photodetectors, which reaches up to 1600 devices,” said Sung Kyu. Park, a professor at Chung-Ang University. .

The device demonstrated excellent color selectivity and excellent photosensitivity. In the long term, the team believes that future improvements could allow vertically stacked quantum dots to replace existing CMOS sensors in many applications due to their simple fabrication, low power consumption, durability and capacities. “It should be widely applicable in areas such as wearable sensory systems, biomedicine and autonomous driving,” Park said.