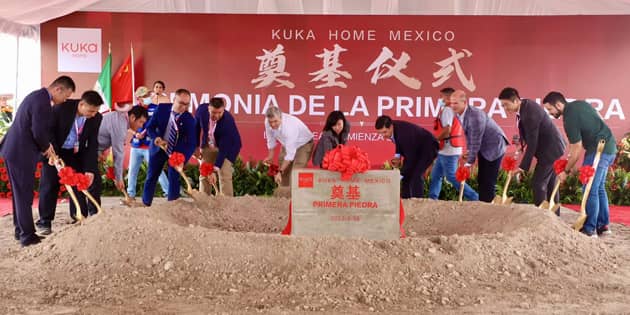 Members of KUKA HOME’s management teams in the United States, China and Mexico, along with local government officials, inaugurate Phase 1 of a planned manufacturing, research, design and office campus a total area of ​​2.3 million square feet at a groundbreaking ceremony in Nuevo Leon, Mexico.

Attended by KUKA HOME management from China, the United States and Mexico, as well as local employees, customers, suppliers and national and local government officials, the groundbreaking launches the expansion of the company’s manufacturing capacity in North America. It recently purchased 90 acres at the Mexican site to build four upholstery and mattress production facilities. Kuka Home has been producing upholstered furniture, accent chairs and upholstered beds at two campuses near Monterrey, Mexico, totaling more than 350,000 square feet, and at their 250,000 square foot mattress facility, for nearly two years.

“This groundbreaking ceremony marks an exciting new chapter for KUKA HOME and the start of Phase I of the first 360,000 square foot manufacturing and office facility,” said Rain Jin, Vice President of international business at KUKA HOME. “Within the next 3 years, this will become KUKA HOME’s largest manufacturing base in North America. The facility will integrate research, design, production and sales. Eventually, this will represent 23% of our global sales,” she said.

The company plans to invest more than $200 million in the manufacturing campus. “This calculated investment is based on the support of our diverse customer base telling us that they will continue to increase their orders based on the successes they have had with the current KUKA HOME product manufactured in our existing facilities,” said Matt Harrison. , President of KUKA HOME North America.

The company plans to begin production of mobile and stationary upholstery from the facility in the first quarter of 2023. Phase II will include the addition of a showroom, research and development center and a state-of-the-art testing laboratory.

Ivan Rivas, Secretary of Economy of Nuevo Leon, highlighted the factors that led to KUKA HOME’s strategy to make this site one of its global manufacturing bases. “Here we have highly qualified human capital, including technicians and engineers for their research and development center, as well as a strategic geographical position near the Colombian bridge to facilitate export to North America. .”

KUKA HOME is a global leader in the design, development and production of stylish, high-quality, value-priced upholstered furniture sold in over 120 countries. Founded in 1982, KUKA HOME has global headquarters in Hangzhou, China and the United States, as well as a showroom in High Point. The company’s highly efficient vertically integrated supply chain includes more than 10 global furniture factories, a mattress and mechanism factory, and production and design research centers in China, Vietnam, Mexico, Milan and at High Point.

Read other articles by Nicholas Ledoux