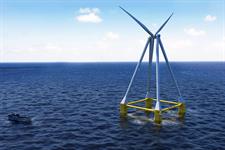 Acciona Energía is set to receive EU funding to install a 4.8 MW turbine on a concrete floating platform as part of a research project and to demonstrate a shaped floating platform of pyramid in the Black Sea under another.

Meanwhile, Technip and X1 are set to deploy a 6 MW turbine on the latter’s stretch-legged platform (TLP) at the Mistral test site in the French Mediterranean.

Funding for the EU’s Horizon Europe research and innovation program is subject to full formalization. Acciona said it is expected to receive around 16 million euros for each project, while neither Technip Energies nor X1 Wind have indicated how much they are likely to receive.

It aims to have the 4.8 MW prototype operational within two years of project launch. Acciona has not confirmed when that will be, where the prototype will be installed or what design the platform will have.

The Spanish energy company is also involved in a separate project led by the Energy Research Institute of Catalonia, in which the engineering company Eolink will develop a floating platform for a 5 MW wind turbine.

Eolink, backed by Acciona, designed a pyramid-shaped floating wind turbine concept with the nacelle supported by four masts rather than a single tower.

Under the EU-funded project, he aims to have an operational prototype in the Black Sea within three years.

Its research partners include the oil and gas company Petroceltic Bulgaria, education and research organizations such as the University of Constanta, the European Center for Marine Energy, the EU Center for Policy Studies, the Brunel University, Fraunhoffer Gesellschaft, University of Mining and Geology of Bulgaria, as well as SPG, MCE, Sivas, Deniz Üstü Rüzgar Enerjisi.

At the same time, Technip Energies and X1 Wind hope to demonstrate the latter’s floating offshore wind technology and accelerate its industrial-scale deployment.

The X1 Wind floating offshore wind turbine concept is based on a stretched leg platform (TLP) mooring, with a wind vane system and a downwind turbine.

The design allows for a lighter floating platform design, resulting in less steel and a smaller mooring system, which X1 Wind says will minimize the impact on the seabed.

The partners aim to deploy a full-scale 6 MW prototype at the Mistral test site in the French Mediterranean.